CES Special Effects Travel to Lincoln Park Zoo and The Museum of Science and Industry, Chicago

CES's Icewall technology can be seen around the world.

CES began establishing itself as a special effects contractor in the mid 1990's.  The Universal Studios' Terminator 2 and Twister attractions launched CES's special effects reputation.  In 1999, CES's invented the Icewall.

This innovative proprietary design solidified us as a go-to company for special effects systems.  CES designs and builds each custom Icewall at its corporate headquarters in Longwood, Florida.

The latest Icewall editions can be seen at the Lincoln Park Zoo,Walter Family Arctic Tundra exhibit, and the Museum of Science and Industry, Extreme Ice exhibit.

According to reporting by Evan Garcia, with WTTW, Chicago, At the Lincoln Park Zoo "Visitors will be able to watch polar bears cool off in an ice cave powered by an industrial size ice machine that can run 24/7. The cooling area of the old polar bear exhibit was indoors and out of public view.  The polar bear exhibit features an ice wall, which looks and feels like an iceberg. It offers visitors another way to experience the exhibit.

"Now there will be a place on exhibit where they can get cool," said Steve Thompson, the zoo's senior vice president of capital program management. "So during our busiest time of the year, in the summer, visitors will still be able to see the bears." Museum of Science and Industry:Extreme Ice

"Make a physical connection with ice by touching the real 7-foot-tall ice wall." 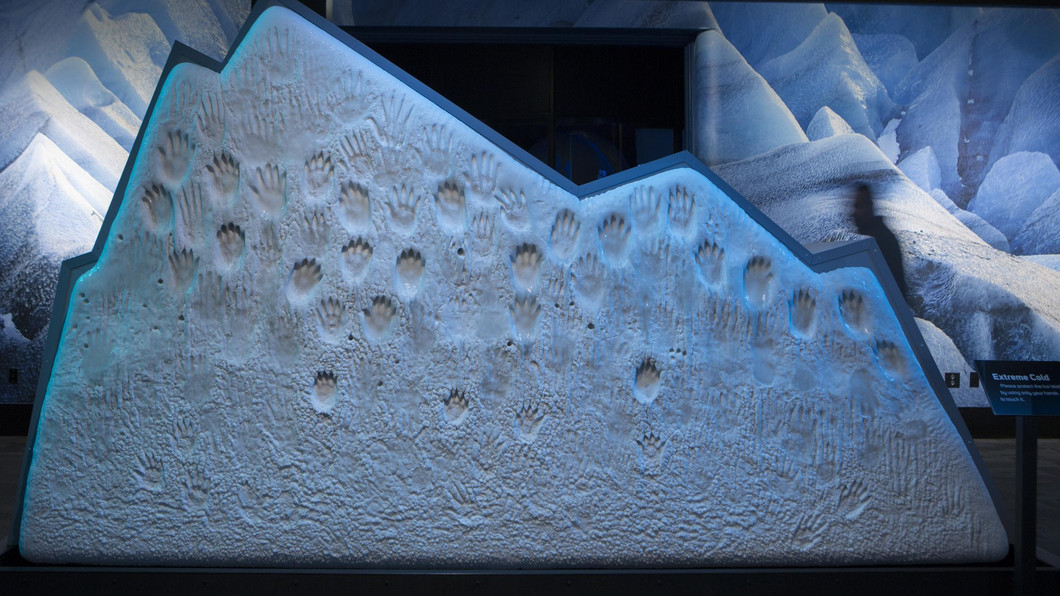 CES History of the Icewall:

In 1999, CES was contacted by Michael Harrifs and the Friedrich Watkins Company to create a replica iceberg for the Titanic Ship of Dreams attraction in Orlando.  Under themed construction General Contractor, Friedrich Watkins Company, CES designed, built, and delivered the replica iceberg 60 days after receiving the directive.  Today, CES has produced over 16 Icewalls for Premier Titanic Exhibits, and a dozen or so custom Icewalls delivered around the world.

CES's proprietary Icewall design utilizes a low temperature refrigerant system that is capable of minus 26 degrees Fahrenheit.  Condensation continues to freeze on the wall surface until the ice surface reaches 32 degrees.  An Icewall of 12" thick is typical and will reach that thickness independent of where in the world the Icewall is located.

CES has the capability to monitor the Icewalls through zone control panels installed on the backside of the Icewall.  Added Distech Monitoring ECB-350 and Alarm systems preempt any catastrophic loss to the ice.  Customers catch issues quickly with good maintenance.

According to CES's Vice President of Service, Scott Wallick, "In a dry climate like Las Vegas it may take a moment or two for the ice to form, but we have never had a problem in really dry environments. Airflow across the surface most hinders ice formation.  The ice starts to insulate the coil and the surface material until equilibrium conditions are met."

Individuals as far as Kuwait have requested Icewalls for hotels and spa features.  Costs for these Icewalls can be into the six-figure range.  According to Wallick, "The most challenging start-up happened when we were talking to Russians through an interpreter.   Every year CES receives requests for unique installations."

CES's Icewalls have found homes around the world. The Icewall is a favored attraction at the London Science Museum and the California Science Center in Los Angeles, California.